Candidates running for governor and their outside allies have run more television advertisements than ever before, pouring nearly $900 million into appeals to voters on crime, abortion rights and inflation.

A new report by the Wesleyan Media Project finds candidates alone have spent $600 million to air more than 1.3 million television advertisements this year, while outside groups dropped another quarter billion dollars supporting or opposing those on the ballot.

The number of advertisements, and the money spent, has already surpassed previous historical highs set in 2018.

In most of the highly competitive races, Democratic candidates and groups are outspending their Republican rivals, the data show, underscoring the power of incumbency, and in some cases the advantage strong Democratic challengers have built over weaker Republicans.

Whitmer and her allies have combined to run 91% of the advertising in her race, while online talk show host Tudor Dixon (R) and fellow Republicans own just a 9% share of ads that have run. Walz’s campaign accounts for 87% of the ads that have run in Minnesota, while Polis, who has spent millions of his own money on his re-election, makes up 97% of the ads Colorado voters have seen this year.

Republicans in several races that might have been competitive have barely showed themselves on television. Pennsylvania state Sen. Doug Mastriano (R) and his allies had aired just 1,053 individual television advertisements through the end of October, compared with 15,971 ads backing Attorney General Josh Shapiro (D), or 94% of all those that have run.

But a big television edge does not always equate to a runaway race: Evers, whose team accounts for 64% of the gubernatorial ads that have run in Wisconsin this year, is locked in a neck-and-neck race with businessman Tim Michels (R).

At the beginning of the election cycle, Democrats held high hopes of knocking off Republican incumbents in red states that have trended left in recent years. But those Republican incumbents — Georgia Gov. Brian Kemp (R), Texas Gov. Greg Abbott (R) and Florida Gov. Ron DeSantis (R) — are cruising into Election Day with healthy leads in the polls after seizing the advantage in television advertising.

The Republican incumbents seeking new terms in Alabama, Idaho, Nebraska and Tennessee and Democratic incumbents and candidates in California and Maryland have had the airwaves virtually to themselves.

Only two incumbent governors are being outspent on television as they seek new terms. In Oklahoma, Democrats have bolstered state Superintendent of Public Instruction Joy Hofmeister (D) in her race against Gov. Kevin Stitt (R), a contest polls show is surprisingly close. In Vermont, Gov. Phil Scott (R) has not aired any ads; he is expected to cruise to a fourth term next week.

The Wesleyan Media Project data show that most advertising run by Democrats and their allies has focused on abortion rights, following the Supreme Court ruling overturning the right to an abortion, and health care. But in the closing days, a growing share of those advertisements has focused on public safety, as voters say they are concerned about rising crime across the nation. 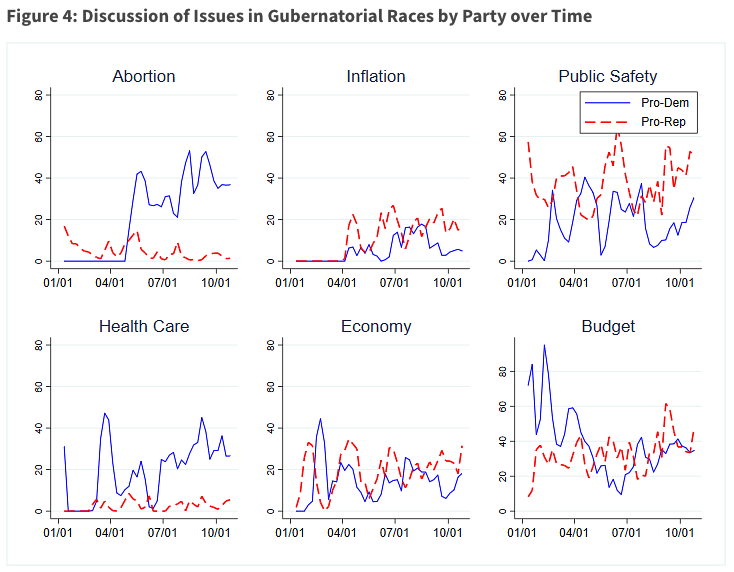 Republicans have been on the public safety bandwagon for months; more than half their advertisements have invoked crime rates, by far the most high-profile issue those candidates have mentioned. In the closing weeks of the race, more GOP contenders have spotlighted the faltering economy, taxes and budget concerns.

Restrictions on foreign ownership of farmland get renewed push