The number of Americans who live in rural areas grew for the first time in a decade between 2020 and 2021, according to new Census Bureau figures, driven by migrants from other parts of the country who are moving to less populated areas.

The Astoria Column, in Clatsop County, Ore., one of the nonmetropolitan counties that grew in population after the last U.S. Census. (AP Photo/Charles Rex Arbogast)

The number of Americans who live in rural areas grew for the first time in a decade between 2020 and 2021, according to new Census Bureau figures, driven by migrants from other parts of the country who are moving to less populated areas.

The study, conducted by Kenneth Johnson, a senior demographer at the University of New Hampshire’s Carsey School of Public Policy, found that the population of nonmetropolitan counties across the United States posted a net gain of 77,000 new residents in the 15 months after the conclusion of the 2020 Census.

That gain was driven entirely by new migrants who moved in. Johnson found 244,000 people moved to nonmetropolitan counties between April 2020 and July 2021. That figure offsets the so-called natural decrease — when the number of people who die outpace the number who are born — that occurred in those rural areas. 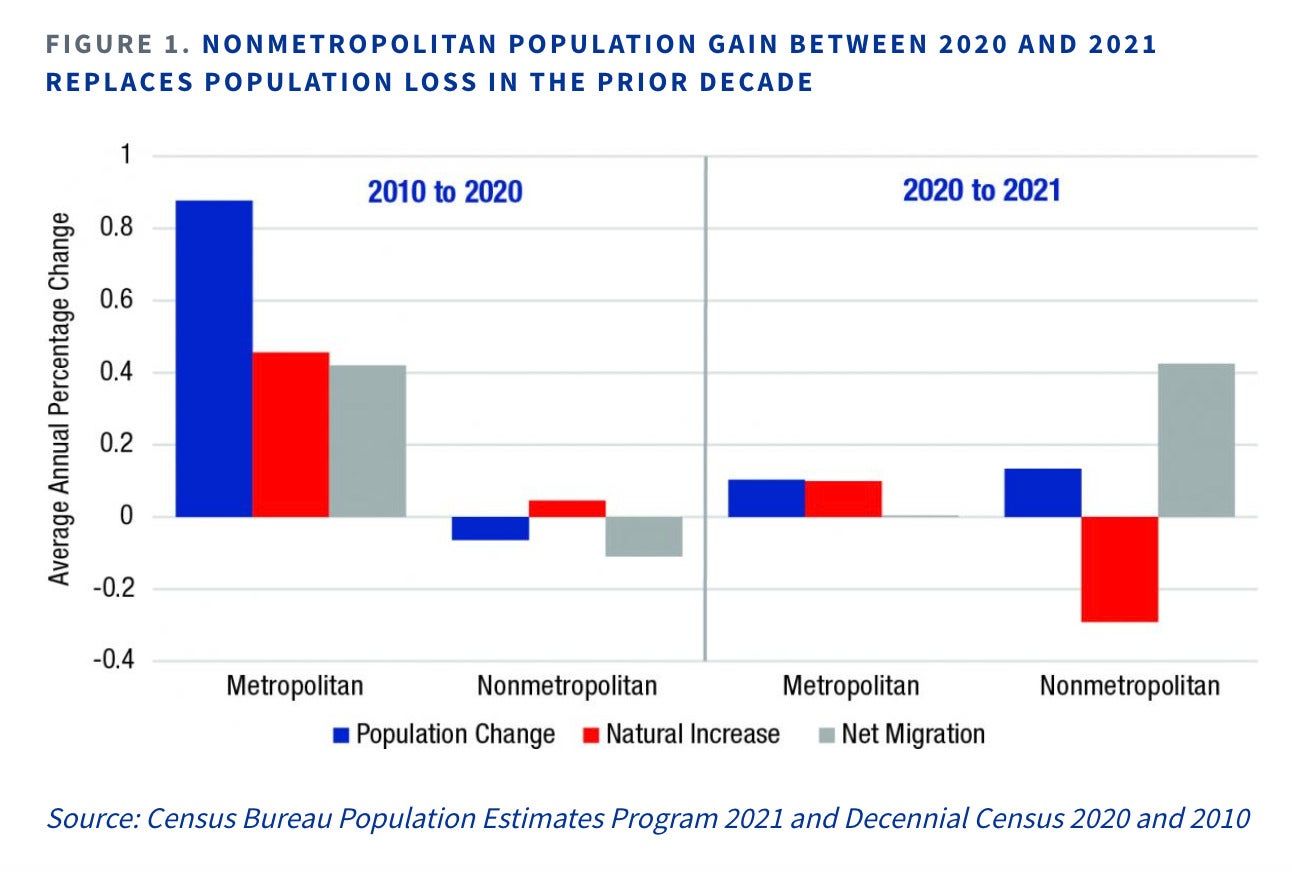 In a paper published in the journal Rural Sociology, Johnson attributed the number of excess deaths to the Covid-19 pandemic.

“Deaths already exceeded births in nonmetro America immediately prior to Covid-19, but the pandemic accelerated the trend,” Johnson wrote.

The population gains in rural areas is a reversal of recent trends, in which those smaller nonmetropolitan counties have lost population for the first time in American history. Rural communities lost a net of 206,000 residents between 2010 and 2015, and another 89,000 between 2015 and 2020.

By contrast, urban counties have been growing for virtually all of American history. But that pace slowed during the pandemic, when metro areas added just 13,000 new residents.

The data mark the first time in almost half a century that nonmetropolitan areas grew at a faster pace than their metropolitan counterparts.

Johnson said the biggest gains came in nonmetropolitan counties adjacent to metro areas, a sign that, in the first year of the pandemic, urban flight to rural areas made possible by the growing acceptance of remote work was a leading driver. More than 90% of counties where recreation and retirement industries are dominant added new residents.

“The migration gains in recreational and retirement areas are likely to reflect their appeal to those able to relocate during the pandemic due to flexible work arrangements or early retirement including the many urban seasonal visitors, retirees, and second homeowners already familiar with the area from previous visits,” he wrote.