Lobbying spending in state capitals is at an all-time high.

Interest groups spent more than $2.2 billion trying to influence state-level governments in 2021 – the highest figure ever recorded – according to a review of lobbying spending data in the 27 states where records are accessible.

As Congress lies mired in gridlock, state legislatures are increasingly stepping onto the front lines of emergent policy debates, tackling new frontiers in privacy and technology along with their more traditional roles in regulating utilities, health care providers and other major spenders.

And as the battlefield shifts outside the Capitol Beltway, major companies are turning their attention to state capitals, where interest groups spend almost as much to influence state lawmakers as they do on members of Congress and the administration. 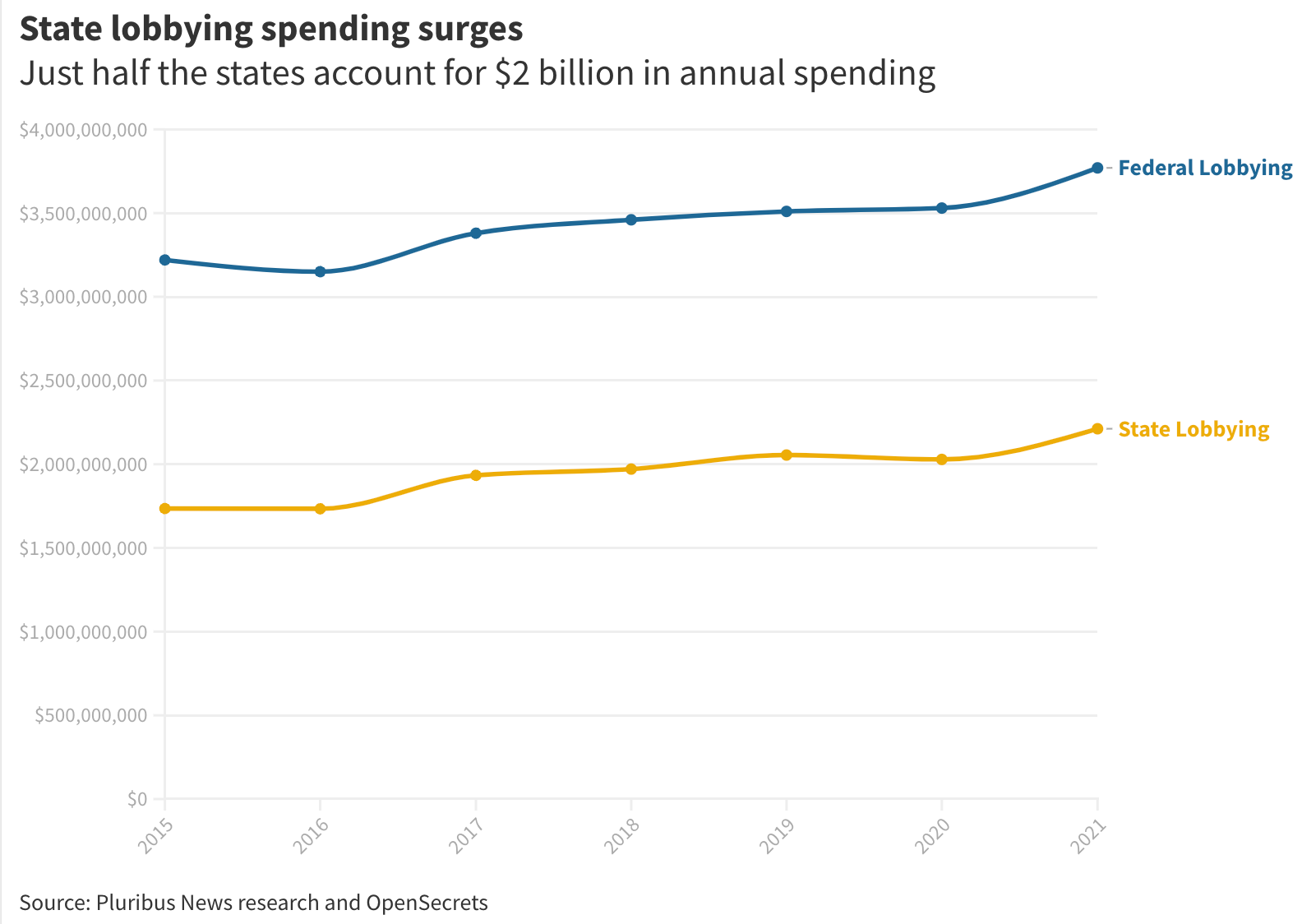 Earlier this year, the maker of Fortnite and other role-playing video games launched a new front against Apple Computers in the midst of a massive federal court case over restrictions on payment processing through the App Store. Epic Games backed legislation introduced in Arizona’s House of Representatives that would have forced Apple, which takes a portion of every in-game purchase it handles, to open its store to other payment processors.

To beat back the bill, Apple hired nine of the state’s top lobbyists, including Gov. Doug Ducey’s (R) former chief of staff. Then, in the space of only a month and a half, the computer behemoth hired scores of lobbyists in at least half the states to do the same thing, including a whopping 25 in Florida alone, registration files show.

The already-rapid growth of state-level lobbying intensified in recent years as the federal response to the global pandemic filled state and local government coffers with hundreds of billions of dollars. Interest groups spent the early months of the pandemic jockeying to be identified as essential workforces, and then campaigning for a piece of the ever-growing pile of aid money.

“All of the policy decisions are being pushed down to the states, because Congress is punting. They’re writing checks and punting. Ergo, the legislature now has these enormous spending opportunities,” said Ron Dotzauer, chief executive of Strategies 360, a Seattle-based firm that has 28 offices around the country.

Both red state and blue state legislators have benefited from a further influx of federal cash, first from the bipartisan infrastructure law signed by President Biden last year and then by the Inflation Reduction Act, which passed on party-line votes earlier this year and allocated billions more for social services and the fight against climate change.

“The infrastructure money that’s made its way down to us and the climate funds from the inflation reduction act, all those are being distributed through the states,” said Lynn Stokes-Murray, director of government affairs at Burr Forman, a lobbying firm based in Columbia, S.C. “The increase in revenue was tremendous and that afforded us the opportunity to deal with issues that had been on the back burner for years.”

In most states where adequate records are kept, the influence industry is setting spending records on an almost yearly basis. Lobbyists and their clients reported spending $392 million in California in 2021, $100 million more than the amount spent only a decade ago. Their colleagues and competitors in New York, Texas and Florida all reported spending more than a quarter billion dollars in 2021. Spending in Pennsylvania and Massachusetts topped $100 million last year.

The true total amount spent in efforts to influence legislators is opaque. Every state has different rules governing the spending that must be reported, and those who must report it, and many states require little reporting beyond what is directly spent on gifts and favors to legislators.

In states like Arizona, Georgia and Ohio, lobbyists are required to report the amount they spend directly on members of the legislature — on meals or drinks or facility rentals for receptions — but they are not required to report how much their clients pay them. That helps obscure the true reach of the influence industryIn states where lobbyists are required to disclose the money they receive from clients, that compensation accounts for the vast majority of total spending.

In Missouri, voters amended the state constitution in 2020 to bar lobbyists from giving anything of value to legislators, which in practice means even less information about those who seek to influence the legislature is made public.

“Lobbying disclosure at the state level is pretty abysmal,” said Pete Quist, who studies lobbying spending as deputy research director at the government transparency group OpenSecrets. “It’s really egregious that you can’t see most of the money in about half of the states. Obviously the public has a fundamental right to know who is drafting and pushing their policies.”

There are other ways to measure the growing amount of money spent on influencing legislators, including the rapid expansion of federal lobbying firms that are opening outposts in the states. Many major Washington-based federal lobbying shops now have state satellites, and most of the major law firms that practice lobbying have their own state-based outposts.

For firms like Stateside and Strategies 360, the growing market has boosted their bottom lines. Though they declined to give specific revenue figures, Behm said Stateside had seen revenues grow 70 percent in recent years; Dotzauer said revenues at Strategies 360 has grown five-fold in a decade, while his staff has grown from 65 to more than 200.

“I think we were all so worried at the beginning of the pandemic that that was going to inhibit business. It didn’t touch it,” Stokes-Murray said. “We were busier than ever.”